TYPES OF WELDING GASES AND THEIR PURPOSE 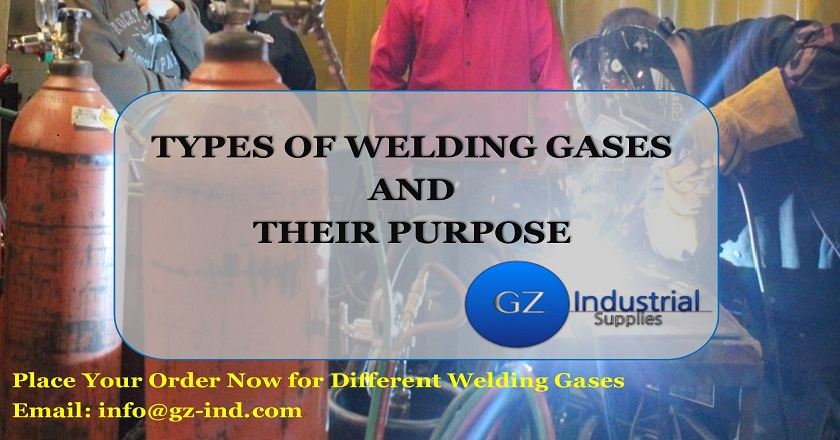 Welding is the process of joining two pieces of materials such as thermoplastics or metal using high levels of heat. The melted parts are then left to cool in order to form a joint. Apart from electricity, there are gases which are often used in the welding process. Gases are often used with the aim of shielding the area which needs to be welded.

Gas welding involves the use of a gas-fed flame torch to heat the metal work piece and the filler material to create a weld. The gas is generally a mixture of a fuel gas and oxygen to create a clean, hot flame.

What is the purpose of gas in welding?

Gas is used in a range of different ways. These include shielding the arc from impurities like air, dust, and other gases; keeping welds clean on the underside of the seam opposite the arc (or purging); and heating metal. Blanketing gases are also used to protect metal after the welding process.

Gases come in two categories: inert or reactive. Inert gases do not change or create change when in contact with other substances or temperatures. Reactive gases do the opposite. They react in different circumstances, creating a change of state in the other substances and/or themselves.

Inert gases are useful, as they allow welds to be achieved naturally without unwanted occurrences weakening or distorting the weld. Reactive gases provide a positive change during the process of the weld, which enhances the way the material is fused.

When air gets into the arc while you’re welding, it causes air bubbles to form within the molten metal, creating a weak and very ugly weld. You cannot MIG or TIG weld without a shielding gas unless the filler material being used is flux-cored or flux coated. This serves the same purpose as a shielding gas, keeping impurities out, but in a different way. Most shielding gases are inert, which makes them ideal for shielding a welding process as they remain stable under welding’s extreme conditions. They also nurture the weld in different ways, depending on the gas being used, including more penetration, more fluidity when molten, and a smoother surface on the bead.

Purging gases are used to cover the underside of the material you’re welding in the same way a shielding gas does, only it’s done separately from the natural process of the weld. While you weld the top of a joint, the bottom of the joint is sealed off and has a flow of gas purging it. It’s frequently used with stainless steel items, and it can be the same type of gas or a different gas than what’s used on the top of the joint.

Certain welding, like gas welding and brazing, requires gas to heat the metal or the filler rods to achieve the welding. This replaces the need for an arc.

Specific types of welding require the metal to be preheated before welding, which this gas is used for. The gas is simply a fuel mixed with air or oxygen, which is lit by a flame to warm or melt the metal.

Blanketing is a process where tanks and confined spaces are filled with a gas after they’re completed to keep air and other contaminants from damaging or staining the finished product. Sometimes it’s used to fill the completed projects entirely. Other times, the gas is added to the air-filled tank, creating a mixture to keep the tank pure against other gases or reactions. 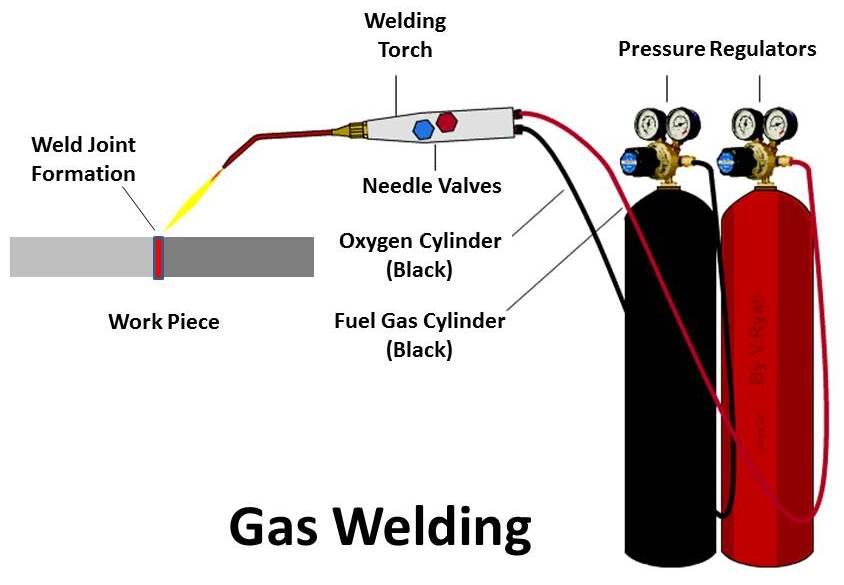 Argon is an inert gas, meaning it should not react with other substances. That is what people thought until they found it changes form at high temperature. It’s the third most abundant gas on earth and is brilliant for keeping environments unreactive, for example, in a light bulb to keep the air from consuming the glowing filament.

Argon is used as a shielding gas to keep air out of a welding arc. It’s used in both the primary

welding stage and to purge the backside of the joint. It’s the most commonly used shielding gas

and is often found in shielding mixtures for MIG welding operations.

Carbon dioxide is what we exhale when breathing, and it’s also created from organic matter. This makes it a very common gas on earth. Industrial C02 used in workshops and other industrial sites is captured from natural gas and then compressed in a pressure tank.

Carbon dioxide is used as a shielding gas. It’s less expensive to buy, but it doesn’t produce the

same quality welds as argon does, and it has issues like more spatter during the welding process.

This is why it’s more commonly used in mixtures, rather than in its pure form.

Almost all life is dependent upon this vital gas. It’s odorless, colorless, and tasteless, and many people consider it a more passive and friendly gas than most others. It’s actually one of the most reactive gases in the world. It’s found in most living organisms and combines with every other gas except the inert gases.

It is mixed in small quantities of shielding gases to add fluidity to the molten pool and speed to the welding process. It’s used to amplify heat with fuel for gas welding and oxy-cutting metals, and when mixed with acetylene, it creates the only flame hot enough to weld steel. Gas welding with oxygen also provides a sufficient shield to protect some metals from needing a shielding flux filler wire.

This highly flammable gas is widely used to produce chemicals for other industrial purposes. It’s highly combustible when mixed with air.

Acetylene is used as fuel for oxy-cutting and oxy-welding. When mixed with oxygen, it’s the most effective gas to form a flame hot enough to cut and weld most metals with ease. It’s more expensive than some other fuel types, but it’s the best type of fuel to use.

Did you know helium is one of the only substances that don’t freeze? Bring its temperature below about 450° F, and it turns into liquid. It’s used in many scientific experiments, and in rockets, decorative and scientific balloons, and hypersonic wind tunnels. We’ve all had our share of fun using helium with balloons or as a voice modifier, but it’s actually a very precious gas vital to human progression. It’s the second most common gas in the universe, but on Earth, it’s not abundant like other gases and is challenging to produce. Because over six billion cubic feet of it is consumed every year, the supply is gradually diminishing. A few helium-collecting space trips might be necessary soon.

Helium is used as a shielding gas, in both its pure form and as a mixed solution with other gases in MIG and TIG welding. It provides deeper penetration and brings a higher heat input to welds, but struggles to provide consistent arc starts. It creates a good mix when used with argon. The argon excels in consistent arc starts, and the helium adds the extra heat needed for specific applications like welding aluminum, and TIG welding in particular.

As the most abundant gas in our atmosphere, covering close to 80% of the earth’s surface and being a part of every living organism, nitrogen is essential. It’s used to preserve and protect many new products like food, motors, tanks, and anything that could be damaged by too much oxygen or other gases.

Nitrogen can be used by itself as a shielding gas for laser welding and plasma cutting, and it is used in some heat treatments. It is also mixed with other shielding gases for specific applications, but it is not suitable for carbon steels. When shielding nitrogen-rich metals, it increases the alloy’s mechanical properties and can deepen penetration while stabilizing the arc. Nitrogen is also used as a blanketing gas once welding is finished inside tanks and enclosed spaces, to preserve the material until it’s used with its intended product.

As the simplest of all the gases, hydrogen is a fuel that the stars, like the sun, use to burn. It is abundant on earth, easy to produce, and burns without emissions while producing water as its final by-product. Aside from being the main element in water, in its raw form, it is used heavily for commercial purposes. It is used in food products like peanut butter and oils, and to create essential chemicals such as ammonia.

Surprisingly, hydrogen is used as a shielding gas in mixtures with argon or C02. Some people are frightened by this thought because it’s combustible.

However, due to the percentage of hydrogen used in standard welding procedures, it is actually very safe. There are risks of weld cracks when hydrogen is used in the shielding gas, but applying protective layers to the weld solves this. Hydrogen is otherwise an excellent shielding gas choice, due to its capacity to produce incredible heat in welds. This increases penetration and makes a much cleaner weld than other gases can produce.

What are the hazards from welding gases?

Hazards from welding gases include:

How can I prevent exposure to welding gases?

It is important to follow manufacturer's instructions, safety data sheets (SDSs), and safety

protocols to minimize the hazards of welding gases.

Do not weld on surfaces that are still wet with a degreasing solvent.

Do not weld near degreasing baths.

and to prevent the accumulation of flammable atmospheres.

Use local exhaust ventilation systems to remove fume and gases from the welder’s breathing zone.

not be used to replace the use of mechanical ventilation.

Gases are an essential part of every welder’s job. Some gases are great in numerous applications, like pure argon for most TIG welding projects, and a mix of argon and C02 for most MIG welding jobs. Knowing the different gases and their purposes will help ensure your welds will be the highest quality possible for their use.

GZ Industrial Supplies Limited offers an array of welding gases in Nigeria. Please feel free to contact us if you wish to know the types of welding gases we have and their purposes, we are here to guide you in making the right choice.