Gas purging is a process of displacing one gas by another gas. It occurs on a routine basis in the natural gas industry when pipelines are purged into and out of service. Purge gas is used to displace the contents of a container. To avoid flammable mixtures, the purge gas is usually inert except in certain instances where the relatively small area of contact allows the amount of flammable mixture to be minimized and controlled satisfactorily. The most common purge gases commercially available in large quantities are nitrogen and carbon dioxide. Other inert gases, e.g. argon or helium may be used.

The element Nitrogen makes up around 78% of our atmosphere and serves as a diluent to the atmospheric oxygen to regulate combustion.Nitrogen is a colorless and odorless gas, and can be put to use in variety of task and objective ways depending on the industry.

Why is Nitrogen used for purging?

Nitrogen is dry and non-combustible and the nitrogen displacement of combustible gases will prevent an unstable and potentially ignitable atmosphere. Simply put, the use of nitrogen in oil and gas industry equipment effectively displaces moisture and oxygen and creates a more stable climate.The goal of any nitrogen purging system is to “cleanse” pipes and other parts that contain contaminants. In doing so, you will significantly reduce any risk associated with hazardous elements, including oxygen. 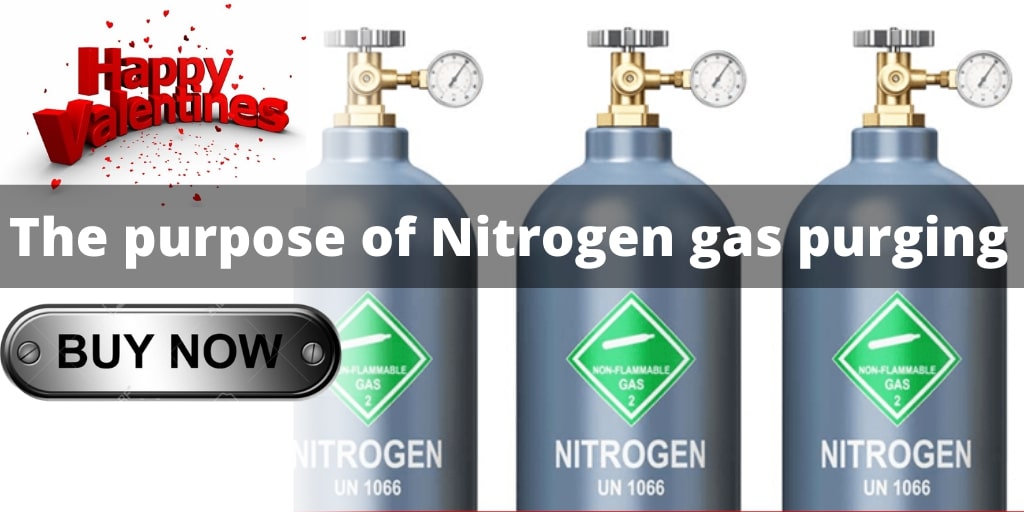 Depending on the method used, nitrogen may circulate at either high or low pressures.When it comes to nitrogen purging, there are varying systems and methods involved — all of which require different equipment. Easily adapted, the method of nitrogen purging will depend on the equipment used (i.e., the shape and type), as well as the location of the purging outlets and inlets.They include the following:

This method is commonly used when the vessel being purged only has one opening or in batch operations like purging ethylene oxide sterilizers. Nitrogen is used to pressurize a vessel or line, it mixes with and dilutes the contents and then the diluted mixture is vented to emission control units. This process is repeated until the vessel is sufficiently purged. The ending concentration for each cycle is proportional to the starting concentration and the high and low pressure in the cycle.

Nitrogen can be used to purge out a pipe run. A “pig” bullet shaped object, can also be pushed through the line using nitrogen gas pressure in order to purge the contents.

This option is ideal for complex systems and equipment cross sections which include kilns, columns, reactors, etc. By mixing nitrogen with the gas you need to purge, contents can then be effectively purged through an outlet point — which should be as far away from the inlet point as possible. When considering this method, the most important consideration is the location of both the entry and exit points. By diluting and displacing the contents in question, this method results in a more inert environment.

A vessel’s headspace can be pressurized with nitrogen to transfer liquid without the use of a pump. This can be advantageous when pumping the material.

At GZ Industrial Supplies, we offer supplies for a wide range of industrial equipment and a variety of services. Contact us now for details about the best system requirement for your Nitrogen purge.