While many of us have heard of ion exchange (IX) resins, few of us have a grasp on how the technology actually works. Whether you’re weighing potential treatment strategies,looking for ways to get the most out of your existing IX resins or simply curious about IX chemistry, you may be asking “What is ion exchange resin and how does it work?”

No matter your goals this article will help you to make better decisions on the right water treatment strategies for your facility by helping you to better understand Ion exchange resin technology, the use of resin for water treatment, and how it serves a variety of water treatment and separation needs and definitely where to get them.

On the other hand,Water treatment is any process that improves the quality of water to make it appropriate for a specific end-use. The end use may be drinking, industrial water supply, irrigation, river flow maintenance, water recreation or many other uses, including being safely returned to the environment.Water treatment removes contaminants and undesirable components or reduces their concentration so that the water becomes fit for its desired end-use.This treatment is crucial to human health and allows humans to benefit from both drinking and irrigation use.

Water contamination is an important issue globally and new drinking water quality regulations have been introduced for contaminants such as disinfectant byproducts, arsenic, nitrate, perchlorate and uranium. Specialized IX resins address these challenges.

What are ion exchange resins?

Ion exchange is a reversible chemical reaction where dissolved ions are removed from solution and replaced with other ions of the same or similar electrical charge. Not a chemical reactant in and of itself, IX resin is instead a physical medium that facilitates ion exchange reactions. The resin itself is composed of organic polymers that form a network of hydrocarbons. Throughout the polymer matrix are ion exchange sites, where so-called “functional groups” of either positively-charged ions (cations) or negatively-charged ions (anions) are affixed to the polymer network. These functional groups readily attract ions of an opposing charge.

What are Ion Exchange Resins(IX resin) made of?

The IX resin matrix is formed by cross-linking hydrocarbon chains with one another in a process called polymerization. The cross-linking gives the resin polymer a stronger, more resilient structure and a greater capacity (by volume). While the chemical composition of most IX resins is polystyrene, certain types are manufactured from acrylic (either acrylonitrile or methyl acrylate). The resin polymer then undergoes one or more chemical treatments to bind functional groups to the ion exchange sites located throughout the matrix. These functional groups are what give the Ion exchange resin its separation capabilities, and will vary significantly from one type of resin to the next. The most common compositions include:

How does ion exchange resin work?

To fully understand how Ion exchange resins work, it is important to first understand the principles of the ion exchange reaction. Put simply, ion exchange is a reversible interchange of charged particles—or ions—with those of like charge. This occurs when ions present on an insoluble Ion exchange resin matrix effectively swap places with ions of a similar charge that are present in a surrounding solution.

The Ion exchange resin functions this way because of its functional groups, which are essentially fixed ions that are permanently bound within the polymer matrix of the resin. These charged ions will readily bond with ions of an opposing charge, which are delivered through the application of a counterion solution. These counterions will continue to bond with the functional groups until equilibrium is reached.

Let’s apply these concepts to a typical Ion exchange water softening system. In this example, the softening mechanism consists of a cation exchange resin where sulphonate anion (SO3–) functional groups are fixed to the IX resin matrix. A counterion solution containing sodium cations (Na+) is then applied to the resin. The Na+ are held to the fixed SO3– anions by electrostatic attraction, resulting in a net neutral charge in the resin. During an active IX cycle, a stream containing hardness ions (Ca2+ or Mg2+) is added to the cation exchange resin. Since the SO3– functional groups have a greater affinity for the hardness cations than for the Na+ ions, the hardness ions displace the Na+ ions, which then flow out of the IX unit as part of the treated stream. The hardness ions (Ca2+ or Mg2+), on the other hand, are retained by the IX resin

Use of resin for water treatment

Ion exchange (IX) resin technology has been used extensively as a practical and effective form of water treatment for many years,it is often used with water softening,which is its most common application. However, ion exchange resins have many other applications. The IX process removes soluble ionized contaminants such as hardness and alkalinity from water via a reversible ionic interchange between a solid phase (resin beads) and liquid phase (water). IX resins’ two main categories are cation and anion. Cation IX resins include strong/weak cation, (H+ and Na+). Anion IX resins include a strong/weak anion, such as OH- and Cl-. Acting together or alone, these types remove many ionic contaminants from water. Neither type removes non-ionic contaminants such as benzene.

Ion exchange resin has been an effective water treatment tool for many years. The most common use by a long way is for water softening. Ion exchange resins, however, have many other less frequently used applications. Resins are used to reduce arsenic, nitrates, uranium, perchlorate, and more. This mechanism is very helpful in production of “deionized water’’and most cases also demineralized water, where the ions and minerals are completely removed.

Here’s a chart showing types of resins and many of their uses:

How to use resin for water treatment 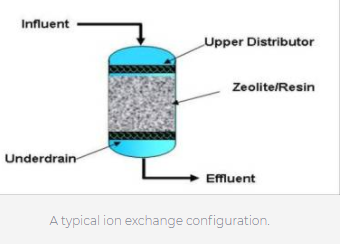 This attraction is used to remove dissolved ionic contaminants from water. The exchange process occurs between a solid (resin or a zeolite) and a liquid (water). In the process, the less desired compounds are swapped for those that are considered more desirable. These desirable ions are loaded onto the resin material.

These resins can be used alone or in concert to remove ionic contaminants from the water. If a substance is not ionic, such as benzene, it cannot be removed via ion exchange.

GZ Industrial supplies is the distributor and supplier of Ion Exchange Resin in Nigeria. Contact us.