Deionized (DI) water is water that has been treated to remove all ions – typically, that means all of the dissolved mineral salts. Distilled water has been boiled so that it evaporates and then re-condensed, leaving most impurities behind.

Distillation is one of the oldest methods for creating pure water. Filtered water is heated until it has evaporated, turning into steam. This steam is collected in a sterile container, where it condenses and becomes water again. Because water has a lower boiling point than most contaminants (including minerals), they are left behind when the water turns into steam. The resulting water is, therefore, very pure. In addition, some water is double or triple distilled, with the condensed water being boiled and condensed a second or third time.

Deionized water (DI) is water that has had all of the ions removed. Ions are charged particles, meaning that they have a positive or negative electrical charge. Many of the impurities in water are dissolved salts, a type of ion. When water is passed through the DI system, the ions are easily removed, leaving clean, pure water. The water passes through two types of ion-exchange resin, which swap out positively and negatively charged particles for hydrogen (H+) and hydroxyl (OH-) ions.

What you Need to Know About Deionized Water

Where to buy Deionized water

What you need to know about deionized water

The idea of deionizing water started years ago with the scientists’ notion that water is better if it is pure.

Deionized water, is sometimes referred to as demineralized water primarily because they are both sources of pure water (but in the ideal sense DI and DM are  different )  , DM is water wherein all of its mineral ions such as sodium, iron, calcium, copper, chloride, and sulfate are removed. It is clean, safe and it tastes great. Also, it does not contain any chemicals or harmful toxins. While DI water is water that is ion-free , this implies that all dissolved salts have been treated and removed.

Big manufacturing firms, pharmaceutical companies, and laboratories use deionized water in their experiments and products.

One can install a water filter in their home that uses direct osmosis to create deionized water. It can be costly. However, the benefits it gives can outweigh the price. Also, the system is easy to maintain since it only has a few accessories which you need to clean every month.

The water filter can be used in other places like hospitals, offices, and schools where the hard water is unsafe for drinking. Meanwhile, the ions lost in the process can be obtained through eating healthy fruits and vegetables in your diet.

Deionization is a chemical process that uses ion-exchange resins, specially manufactured, and exchanges hydrogen and hydroxide ions for the dissolved minerals. Then, it recombines again to form water.

The process of deionization can produce highly pure water, which is similar to distilled water since the majority of non-particulate water impurities can dissolve in salt. Also, deionization does not build up the scale, and the process is faster.

On the other hand, deionization cannot remove uncharged organic molecules plus the bacteria and viruses, not unless you use incidental trapping in the resin. As such, deionized water can still pose health problems in the end.

But if you use specially-made and strong base anion resins, then it can remove even gram-negative bacteria. Furthermore, one can continuously and inexpensively do deionization through electro-deionization.

Meanwhile, there are three types of deionization processes: the

The co-current deionization pertains to the original downflow process of the water. In this process, both the regeneration chemicals and the input water enters at the top of an ion-exchange column, and both exit at the bottom.

Regenerate chemicals are diluted as it encounters the bottom or finishing resins in an ion-exchange column. As such, the quality of the product is lower versus a similarly sized counter-flow column.

Today, this process is still used by some companies. It can be maximized by focusing on the flow of the “regenerants” within the ion exchange column. 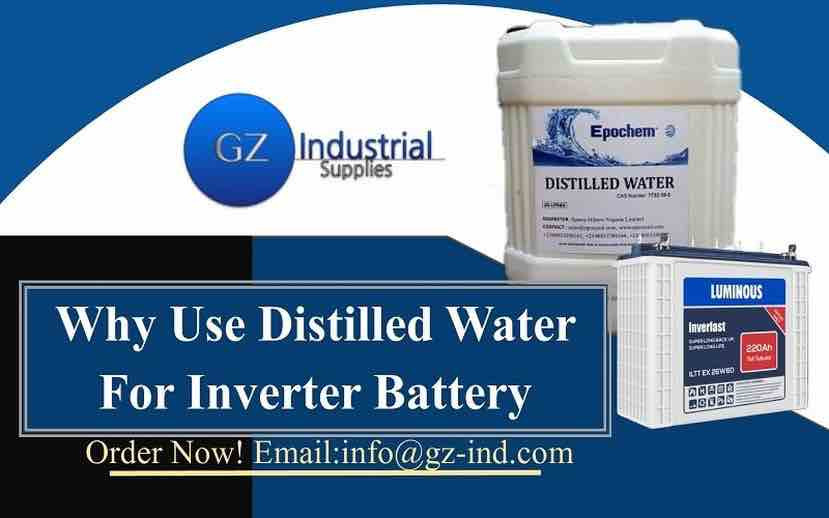 Why distilled water for inverter battery

Second, the up-flow regeneration. With this one, the water will enter from the top while the regenerants enter the bottom part.

In these two cases, there must be separate distribution headers that must be tuned up. The input water flow and its quality, desired product water analysis, and operation time between regenerations must be set accordingly.

Among the three types of deionizing the water, counter-current deionization is a more attractive method of exchanging ions. Chemicals or regenerant can be able to flow in the opposite direction towards the service flow. As such, there will be less time needed versus the co-current deionization.

Furthermore, the quality of the final product can be as low as 0.5 parts per million. Indeed, there are various advantages of counter-current deionization. Some of which are requiring low operating costs and low usage of regenerants in the entire process.

Lastly, the mixed bed deionization is a mixture of anion resin and cation in a 50:50 ratio. This mixture is joined in a single ion-exchange column. It also contains a mixed bed demineralizers as the final water polishing that can clean the last few ions in the water before using it.

Studies show that the water produced by the mixed bed deionization through a single pass can be the purest among all water types with proper treatment.

In this type of system, a controller operates the valves and the pumps so regenerants can mix with the anions and resins in the ion exchange column. Take note that each of these is regenerated separately and combined again during the regeneration process.

This kind of system is used only when the company requires the highest purity of water. It can achieve efficient and quality water through difficult and expensive regeneration.

Deionized water is used in various chemical processes and other applications which require water of high purity.

Water of known purity is often required in chemistry and laboratory applications. Accurate test results can only be obtained when the purity of the water used in experiments is reliably known. Adequately pure water is also needed for cleaning lab equipment and sterilization.

Water purity levels are classified from Type I to Type IV, where Type I is defined as ‘ultrapure’. Water purity is assessed using various characteristics including:

Various industries make widespread use of pure, deionized water. They include chemical processing, petrochemicals, pharmaceuticals, power, food and beverage industries along with micro-electronics.

Deionized water is commonly used in engine cooling systems as the low level of mineral content means there is minimal scale build up, thus prolonging the life of the system. It is also often used to top up lead-acid batteries. Also used for washing and rinsing surface prior to paint finish, to improve adhesion and improve surface finish.

Regular tap water contains varying levels of dissolved contaminants, including minerals. These contribute to the electrical conductivity of the water which makes it unsuitable for many cooling applications. These dissolved minerals will also contribute to the build up of scale, corrosion and erosion. Deionized water is therefore preferred in these applications as it has a far lower level of electrical conductivity and will not result in unwanted scale build up.

The design of cooling systems require special consideration in order to minimize or avoid any downtime. Such systems require tight control and continuous monitoring of the deionized cooling water conductivity to ensure that required temperatures are maintained.

Regular tap water is not ideal for most aquariums as the impurities promote the growth of algae. Deionized water is often preferred for its purity which helps to improve the overall health of aquatic life.

Boiler feedwater is the water that is pumped into the boiler steam drum where it is turned into vapor. If this water contains significant dissolved minerals then there will be a build up of scale in the steam drum.

The quality of the boiler feedwater is clearly important as it affects boiler performance, scale build up and corrosion. Deionized water is typically used as this helps to minimize these issues and prolong boiler life.

The low electrical conductivity of deionized water makes it safer to use in fire extinguishing applications for electrical equipment.

Where to buy deionized water in Nigeria

GZ Industrial Supplies has a plethora of quality chemical solvents, lubricants , power tools and other industrial products. You can buy quality DI and DM water from the offices below:

Ion exchange resins are used to produce deionized water (demineralized water or DI Water) . These resins are small plastic beads that are composed of organic polymer chains that have charged functional groups built into the resin bead. Each functional group has either a fixed positive or negative charge.

WBA resins do not remove silica, C02 or have the ability to neutralize weak acids and have a lower than neutral pH when used in a dual separate bed system.

SBA resins remove all anions in the above table, including C02, and have a higher than neutral pH when used in a dual separate bed system due to sodium leakage.

In GZ INDUSTRIAL SUPPLIES, we deal on a wide range of industrial tools [ ingco,bosch,maxmech, etc ] , heavy duty equipment and parts, all kinds of lawn mowers, chemicals for onshore and offshore services.