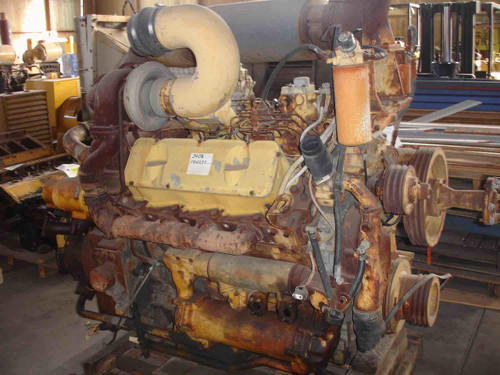 V8 variant of the popular 3406 engine. It was first introduced in the 1970s and discontinued around 1985. Although considered pricey at the time (and a bit on the heavy side) it soon gained popularity, especially as a marine engine. You can find countless listings for the CAT 3408 to this day (most of them marked sold) because of its many strengths.

The CAT 3408 is a diesel internal combustion engine that can provide quite a bit of power. This 8-cylinder engine can achieve anywhere from 440 to 520 horsepower and generate up to 266 kW of electrical power. For truckers, this power may not have been enough to offset the added weight of the engine, but for many other applications, this performance was more than enough.

These engines wouldn’t be so popular today if they weren’t built to last. In fact, they probably wouldn’t even be around today. Thankfully, these engines have a life expectancy of 16,000 hours (nearly two years) and OEM parts are still available for 3408 marine engines thanks to Caterpillar’s ongoing commitment to their customers.

The CAT 3408 is a versatile engine that is suitable for a wide range of applications including:

The 3408 still experiences significant demand as a marine engine so let’s conclude by talking about that in more detail.

Use as a Marine Engine

The 3408 models are great engines for medium-sized vessels like shrimp boats, tug boats, and ferries. They provide more than enough power for these applications and with proper maintenance and care have been known to last years. Also, Caterpillar has recognized the popularity of the 3408 for marine engine applications and continues to offer engine overhaul kits. It’s difficult to find a better deal than that when buying used.

Bottom line: the CAT 3408 is aging gracefully. It’s still used in a variety of industries because of its power, longevity, and the quality CAT engineering on which many companies depend. The biggest issue you’ll run into with the CAT 3408 is finding a listing that hasn’t already sold.

For more help finding the appropriate engine for the job, please contact us at GZ Industrial Supplies. We can help assess your power needs and job requirements, both in the short-term and the long-term, to find the right engine for the job.